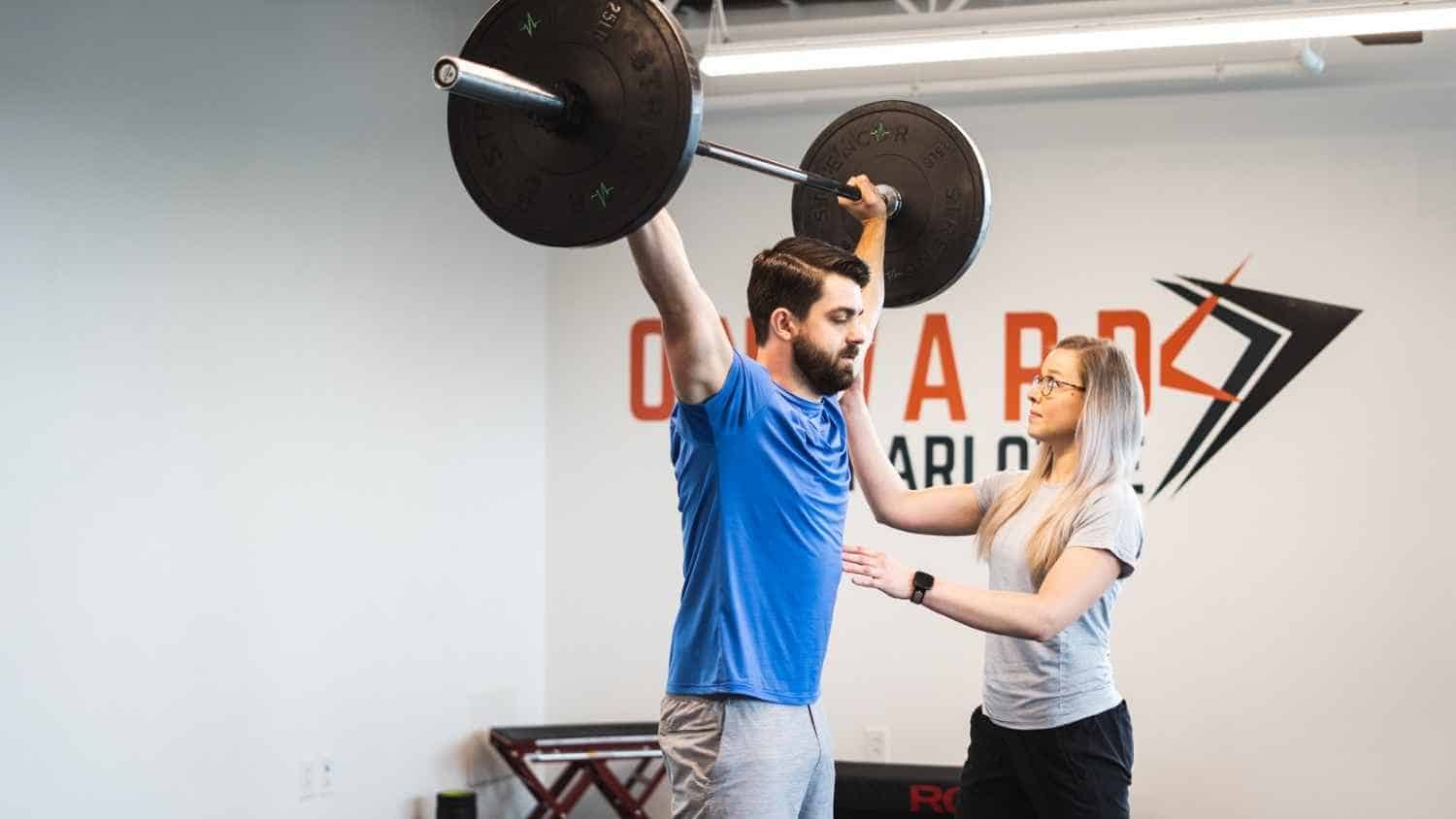 In this video, Zach and Pamela discuss the overhead press and the points of performance for this exercise. While this is a simple exercise, a few technique considerations will help you lift more weights, and keep your shoulders feeling good as you progress!

At Performance Plus, we have several programs to help our your overhead press:

Pamela is holding a barbell in a front rack position. If we compare this to a front squat, though, for example, her elbows are going to be much lower, and the front squat will get those elbows super high. But what you’ll feel when you’re in that position is a lot of tricep and elbow tension, and that’s just not a strong position to press out of. So, we drop those elbows down, but it is important to note that the elbows are still in front of the barbell so that she is still in a front rack shelf position. So, hands just outside of her shoulders, that bar is resting across her clavicle.

We’ve got a brace neutral spine position throughout the entire life.

With the overhead press, we want to keep this barbell’s path fairly vertical. And so, in order to do that, Pamela’s chin is in the way. So, Pamela is going to imagine that I have a dirty sock in my hand, and that I’m moving that sock towards her face, and you’ll see her pull her chin back.

She then initiates that press overhead. When the bar gets past her head, she lets her head come back to neutral. We don’t need to press our head forward like we see a lot of people do in competition. That is something that will be done in competition to make sure somebody actually gets their ear past their arm. It’s just that extra little insurance that they don’t get a no wrap on the overhead press or its variations. We don’t need to emphasize that when we’re training for just general fitness. So, head moves back, press, let the head come back towards neutral. On the way down, we’ll see the head come backwards again to move it out of the way of the bar.

The final thing to pay attention to in our overhead press is what we look like in the lockout position. So, what we want to see here is that we maintain this brace neutral spine position. We’re not overextending our spine to either make up for some mobility limitations or strength limitations somewhere. That’s staying braced and neutral. The bar is sitting right behind the center of her head. So, I can barely see her ear from the side. And Pamela is not letting that bar press her down. She is actively pressing up into the bar. That’s not a shrug, but that’s her imaging that there’s a giant pile of bricks on top of this barbell. And she’s not going to let that pile of bricks come crashing down on her head. That is an active shoulder position, and that’s where we want to stabilize the bar when we’re overhead for the overhead press or any other overhead lifting variations that we’re doing.